PARC meeting picture, progress and not on the TV 3 tube tester


Here is a picture of the meeting we had at PARC with some of the original researchers who built parts of the Alto. 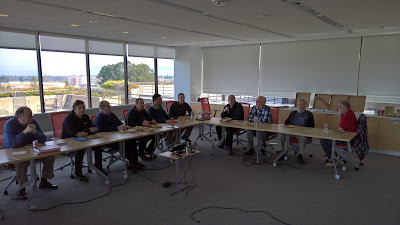 I removed the meter from the tester chassis, opened it up and was delighted to find that the series wirewound resistor was open! As long as the movement itself works, I only have to install a substitute resistor to repair this.


The meter movement moves fine on its own, restricting the repair to a replacement for this. It was helpfully marked on the face with its precision resistance - 1,640 ohms - which is the value I must shoot for in a substitute.

While I am going there, I cataloged the capacitors that must be changed to finish the restoration. One challenge is that I can't locate one of the capacitors shown in the manual I downloaded. It has clear pictures of where it should be, but the location is somewhat different and there is absolutely no capacitor there.

The manual I found was from 1949, for the TV-3/U while my unit is a TV-3A/U from 1950 or 1951. I bit the bullet and ordered a manual reprint from ebay which should arrive on Saturday. It may be that one of the three capacitors I ordered do not even exist in this unit, but I have visually verified two of them.

Parts in hand, I began soldering the replacement components on the tester. Somehow, while preparing to solder the series precision resistors into the meter, I managed to pop the movement off its bearings. I suspect this is now totally broken, by a stupid mistake, when it was almost salvaged.

The capacitors went on, anyway, so that when I either repair or more likely spend a fortune to replace the meter, the tester will then work. Building the solid state rectifier tube replacement now.
Posted by Carl Claunch at 6:42 PM