Finished up the upgrade of 026 keypunches, 1401 power sequencing, and built Digicomp I replica

I finished up the work changing out selenium rectifier stacks for silicon diodes in the remaining two 026 keypunches. It was a somewhat tedious job but done by lunchtime.

I managed to find another IBM 030 transistor and heatsink, which I put into my modified power sequence card for the 1401. This version of the circuit, discovered in the main 1401 ALDs but not matching the cards installed in the systems, runs much cooler.

The original cards, used to validate a power supply voltage and activate relays in the powerup sequence, had pretty low resistor values biasing the transistor, one end of the divider tied to a 30V reference voltage and the other tied to the power supply being validated. It burned almost 4W in the divider, all the time, with the two resistors sitting flat on the card with no airflow around them.

The result is scorched card material, sizzling hot resistors and periodic failures of the cards. The alternative schematic I found replaces a 600 - 56 divider with a 3000 - 220 divider and puts in a different transistor number with a small heatsink. The circuit runs about 25 times cooler.

Now we have both of the two sequencer cards in the German 1401 converted. As soon as Glen, our wizard finding parts in the workshop, returns and finds me two more, I will convert the two cards for our other 1401.

When I was young, in the 1950s and early 1960s, the only 'computer' access available to virtually any youth were machines designed to teach computing principles but built with mechanical, switch and light bulb and perhaps a few relays on the high end options.

Geniac (sometimes called Brainiac), consisted of a large perfboard with six large round perfboard dials, where the holes would be filled with screws and nuts, so that the round dial's screws contacted the screws on the main perfboard underneath. One wired between the various screws to implement logical functions, ultimately illuminating one or a few small flashlight bulbs to indicate the answer. 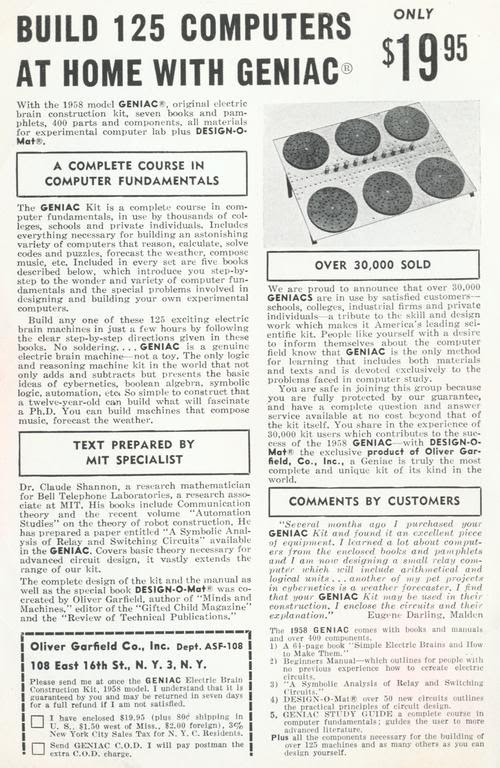 Digicomp I was a plastic kit with three "flip flops", where a lever was turned to implement logical functions. It was programmed by placing cylindrical plugs on the flip flop edges, then when the lever moved the boards, some vertical wire rods were pushed and in turn shoved sliders left and right. The outcome was read through a slot on the left, consisting of the three binary digits that were the current flipflop state.

The Minivac 601 had eight pushbuttons, eight relays, eight slide switches, and eight light bulbs, which could be wired up to implement very simple logic functions. In addition, it had a rotary dial powered by a motor, which acted as a rotary switch. You could program it to run the motor and stop when the dial reached the answer position, thereby energizing or dropping one of the relays.

As you can see, these were incredibly simplistic virtually toys. Unless you were one in a million and had some access to an actual computer, this was all you could get as a 'personal computer' in those days. The Minivac 601 was designed by Claude Shannon, had some cachet, but was also inordinately expensive for a youth, as its price was the equivalent of over $675 today.

I had a Geniac and a Digicomp I, plus I knew a well off schoolmate who had a Minivac 601 that I could look at longingly on occasion. My Digicomp, being rickety plastic, fell apart long ago and was just a memory, but I discovered someone selling a reproduction kit, using cardboard and foamboard rather than plastic.

I just assembled my Digicomp I replica and spent a bit of time 'toying' with it. Three flip flops and a limited number of ways to make them interact - pretty limited but it can count modulo 8 and do some very simple tricks.


My high school had a 1620 computer but the conditions for attending the related class didn't work out for me, so it wasn't until a couple of years later than I had a chance to get hands-on time with an IBM 1130.

Not just keypunch decks of Assembler or Fortran to have run in a batch, like most users, but if I was willing to show up at 2AM when the batch processing was complete, I could work by myself for the rest of the night. Hand stepping code and quick turnaround of coding errors helped me appreciate computers to a sufficient depth that I changed the trajectory of my life and moved into the computer field, rather than working on space programs.
Posted by Carl Claunch at 8:39 PM