I set up the Arduino to attempt to produce 32 steps of illumination for the incandescent bulb, simultaneously setting the LED to the same step number. Each would illuminate for 2 seconds, giving me time to compare both brightness and color of the two light sources, side by side.

On my first try, I didn't get great results. My method of driving the bulb was too crude - X milliseconds on followed by Y milliseconds off, for example 2 on and 3 off. Clearly this didn't work well. Also, I could see that my LED, even at half brightness level, was noticeably brighter than the real incandescent bulb at its maximum brightness.

I adjusted the spreadsheet to produce the exponential curve across 32 steps from 0 to 100% on at a max brightness level of 15% of the LEDs maximum. . I did an abbreviated test with the LED and the bulb both full on. It looked roughly identical, but I will use a phototransistor to measure more accurately later.

With the top of the curve set, I needed a better ratio between turn-on and turn-off time of the filament. Too, if I can refine the shape of the curve as it turns on or turns off, that will make the LED levels even more realistic.

My existing measurement tools weren't working - the original photosensor board with its ADC is too slow to sample the bulb and even at slo-mo speed with the iPhone video, I don't have enough resolution. Too, judging brightness in video frames is hard. Ken Shirriff suggested using a phototransistor connected to a scope, where I could capture and freeze the curves, getting good speed and brightness percentages.

I bought one and continued the testing with the simple cases of bloom from full off to full on, and with fade from full on to full off. These gave me a very nice exponential curve for the fade - taking about 300 ms to fade completely.

The trace for the bloom of a bulb from cold to a full on illumination was less ideal. While you can roughly fit the data points to an exponential curve of shorter duration, perhaps 100 ms maximum, the shape is distorted by reversals in direction. 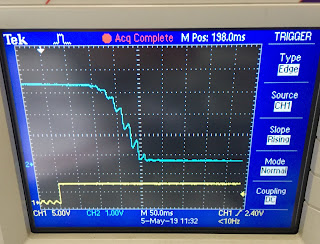 I looked for the cause of this distorted shape, thinking about flaws in my experimental method, the possibility that illumination of a filament exhibits very complex physics, and the nature of the IBM lighting circuit driving the bulb.

The bulb is powered by 7.5 VAC connected through a Silicon Controlled Rectifier (SCR) and the bulb. This means that the SCR will only conduct on the positive half cycle of the AC and switches on when the input lead is above a threshold and the instantaneous AC voltage is above the diode junction voltage drop.

This means that even with a full-on logic signal applied to the SCR input, the bulb will see a varying positive voltage over approximately 8.35 ms, with a slightly longer period of zero voltage as the AC swings down and through the negative half cycle. Since power changes as the square of voltage, there is a dramatic oscillation of power through the filament.

When I looked at a shorter timescale I could see that the reversals or irregularities in the trace do appear to fit a 16.7 ms cycle time. Thus I have to conclude that the console lamps of IBM 1130 and 360 systems will turn on with the odd illumination pattern seen in my scope capture.

My simulation of turn-on would need to be quite a bit more complicated than a simple exponential curve to capture this effect. Whether that is necessary to fool the human eye and brain is an open question, but I will build the initial implementation with solely exponential timing.
Posted by Carl Claunch at 1:13 PM