Some time ago I bought two cabinets worth of a 3420 compatible tape system for about $100. The first cabinet looked clean and unused, plus it had an integrated controller for attachment to IBM bus and tag channels. The second cabinet had suffered a forklift or other transit accident, with the frame bent into a parallelogram outline rather than a rectangle, but most of the gear inside appeared undamaged and unused.
I believe this was an insurance write-off, after which it was to be scrapped but somehow wound up stored untouched in a overpacked warehouse until I bought it. It is clear, after the fact, that there was at least one other drive. I dimly remember the seller mentioning having sold some of the drives to other people.

The IBM equivalent consists of one cabinet per tape drive plus a cabinet solely to house the controller electronics (3803). The Telex series made use of a simpler controller that was fit into the first drive of a string, obviating the floorspace need for a standalone controller such as the 3803.

These tape drives have long vacuum columns to buffer tape movement, supporting operation at up to 125 inch per second in stop-start mode. To support the columns, the drive has both a vacuum pump and an air blower, since during loading and other operations it is necessary to blow on one end of a tape while sucking on the other side.

When I first looked at the drives, I believed that I would need to have 3 phase AC power since the main power cable required the customer to provide 3 phase 208V AC. However, once I began to look through the schematics, it became clear that no part of the machine needed three phase. They simply divided the loads of two tape drives and a controller across single phase 230V by wiring different pairs of the three input phases to each load. A+B, A+C, B+C.

I COULD REPAIR AND USE THIS ON REGULAR HOME 220V SINGLE PHASE POWER!

In the Telex design, a single AC motor is connected by a belt to both the vacuum and blower components. This takes up about a foot of height inside a cabinet and runs the full width. The space required to hold the integrated controller in the first cabinet (drive A) doesn't leave enough space for the vacuum/blower assembly. It also doesn't allow room for the 3 phase main power cable and distribution box.

Sadly, what I have is an A cabinet and an ordinary B cabinet. That means I have no AC distribution and only a single vacuum/blower but two complete tape drives. It appears the special B cabinet was sold to another person.

I CAN ONLY USE ONE OF THE TWO TAPE DRIVES!

Unless I am very lucky and can find a spare vacuum/blower assembly, or can create my own sources of vacuum and blown air at adequate flow rates, only one of the two tape drives can be operated. The other will serve as spare parts. I still need the second cabinet simply to hold the vacuum/blower in place but it will not operate.

The main AC distribution panel sends the single phase power (pairs of the three 3-phase incoming leads) to each drive, which has a power supply inside. The panel also delivers a single phase pair to the integrated controller that is inside my A cabinet. Its sole other contributions are hosting a 110V convenience outlet via a step down transformer, and hosting the 3 phase circuit breaker for the entire tape string. I don't have this panel, it was in the missing special B cabinet, but I don't need it. I can provide single phase power to both the working tape drive power supply and the integrated controller.

I have removed a power supply from the cabinet and will begin to bench test this. It switches the vacuum/blower motor on, delivers 5V for the digital logic, delivers _+45V and -45V for the DC reel and capstan motors, and other voltages such as 12V for miscellaneous purposes. Once I have this working properly, I can begin powering up and testing different parts of the machine.

Inside the box is an enormous transformer and impressive filter capacitors. Step one is to verify the condition of the capacitors before applying power to the first section of this power supply. The output of the biggest transformer, rectified and filtered, is the +45 and -45V needed for the various DC motors. This large transformer is switched on by a triac in the AC switching board.

AC switching controls the vacuum/blower motor and power to the 45V supply. It has a triac to act as electrical switches for those motors. Its other triac delivers power to the "hi voltage" supply which exists to deliver +45 and -45 for use by the servo logic and drive motors.


The small wide PCB (PS1) is the lower voltage board, producing +12, -12, 12VAC and 5V for distribution to the rest of the drive. That lower voltage board has several filtering capacitors that also will be validated before I apply power. It powers up immediately with the drive, unlike the 45V supply that is switched by a logic signal.

A final supply exists to deliver +8V and -8V, hidden in an add-on enclosure on the main power supply box. This box (PS2), like the PS1 board, is on whenever the drive is switched on.

Fortunately, the various circuits can be isolated and tested individually. The control logic for the AC switching is a plug-in card to the face of the power supply, with the triacs themselves mounted on heat sinks behind the card sockets. Adjoining that plug-in board is another, which monitors +12, -12, -45 and +45 volt supplies to generate a 'dump' command to unload the drive if power has dropped.

Mismatch between schematics and actual circuitry

I was examining the various components to locate everything relative to the schematics. I did this so I could decouple the different power supply subunits and test them one by one. I quickly found that the plug-in board for the AC power supply control was substantially different than the one in my schematics.

The schematic has only a single four way diode bridge in place and one filter capacitor to feed the +5V output, making use of photo-coupled triacs fed by a CA3079 chip that detects zero-crossings of the AC input and times pulses to fire triacs.

The actual board has many more diode bridges, two more filter capacitors, and a welter of additional components including transistors. It replaced the photo-coupled traics with optically isolated switches driven by the additional circuitry.

The good news is that it still switches two power sources - AC vacuum motor and 45V servo power supply - using the same pins. I have to assume it is electrically identical at the interface and test it that way. The output of the board fires heavy duty triacs elsewhere in the tape drive to accomplish the actual switching.

The schematic lists the date of the drawing as Oct 1980 while my board has a testing date sticker of July 1980. It seems that I have an older board which was replaced by a new simpler and lower cost design in late 1980 or early 1981.

Remainder of circuitry matches my schematics!

The dump plug-in card is identical to schematics, as is the PS1 and PS2 supplies that provide 12, 8 and 5V levels. The high voltage (45V) circuits and all the other wiring also matches the schematics perfectly.

The missing 3 phase distribution panel that would have been in the special B cabinet provides sockets for cables to deliver 3 phase power to every other cabinet as well as to the power supplies in the special B cabinet. It is a squarish connector, although the only such connector I have had the cable cut off.
This plugs into a socket on the drive cabinet, where only two of the phases are selected and the third pin is removed entirely. Thus, the cabinet is set up to run on one of the three possible load positions by its wiring and the installation would attempt to distribute the cabinets on each load position to balance out the current draw on each of the three phase wires. 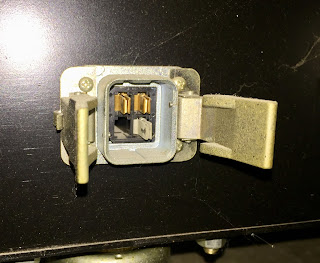 The wiring inside the cabinet goes to a more common 220V connector that plugs into the rear of the power supply enclosure. This makes it easy for me to provide power to the tape drive, bypassing the 3 phase distribution box and obviating the need for the huge 3 phase connector normally used to power the entire string of tape cabinets.