I moved the Yellow lead over to the jumper installed between Terminal Ready and Clear to Send. The terminal itself sees the ready condition, but this still isn't working with the program trying to write to the screen.

It was time to whip out the scope and watch for signals in both directions. Annoying darned serial communications. Outbound characters when typed on the keyboard were captured leaving the terminal, and once the board received a character my inbound data line jumped up from low to high and stayed there. Something definitely off about the board being ready to send data.

Looking at the loop in the program while it is waiting to send out the prompt to the terminal, I see it is loading the 12966A board status word into the A register, rotating it and doing a test. The status word was 014032 which decodes as:

This status word shows that the card should think the other end is ready, but it is hung up looking at the Test bit waiting for it to turn on. Looking at my scope at the terminal, the data line is always low unless sending characters, so that the test bit should be low, but won't go high unless a character is entered.

Thinking I may have a cable problem or wiring issue, I did some testing. The brown wire runs from the terminal output pin 12 RD up to the connector pin S and that is what is monitored as test. I see it at -12V steady unless keys are pressed, which should show up as a 0 in the test bit. Good so far.

Once again I checked the wiring, as well as verifying continuity through the cable to the connector on the 12966A board. All is good as far as wiring and cables. The terminal produces output keystrokes just fine. This remains a vexing mystery but I will keep at it.

More digging and examining of the two types of Display Enhancement Boards, versions B and C, led me to understand the jumpers and dip switches fully. As a consequence I realized that we will have to set the boards differently than normal when installing the alphanumeric character sets we burn.

The PROMs we will use to burn the character set images, while pin compatible, are the type that AND together all four enable pins. The switch setting A on the Display Enhancement Board version C states that it should be closed for alphanumeric characters but what it does is ground CE3. For AND type enable logic that will block the chip from activating. Instead, we need to leave switch A open for all our burned ROMS.

On the older version B of the Display Enhancement Board, two jumper positions are provided for each character set rather than the five DIP switches on the version C board. The second of the two jumpers implements the same function as switch A - ground CE3 of the ROM when closed - and thus should be left open for any PROM we burn.

I also devised the rewiring necessary to stack a prom chip atop a socket, bend the pins sideways and solder wire jumpers to rearrange the signals such that it will behave like a 9 bit rom while mounting an 8 bit prom we programmed. 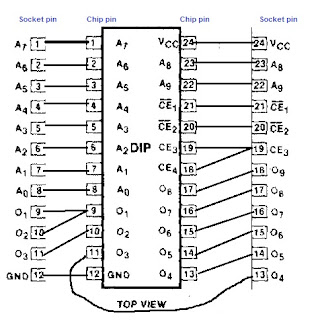