Back to troubleshooting the keyboard device controller circuits in IBM 1130

ISSUES AND OPEN ITEMS AT BEGINNING OF SESSION

The shifted characters, those on the top of the keycap that are selected when the Numeric key is depressed, needed to be verified as producing the proper hollerith encoding.

An XIO Sense Device with Reset bit 15 should turn off the Keyboard Response status and thus remove its request for an interrupt on Level 4, but it was not.

As of lunchtime I am still in the midst of tracing signals to find the root cause, but the issue appears to stem from simultaneous set and reset of the latch, thus leaving it on. Something is triggering a single shot, which I don't believe should be active during this XIO Sense operation.

SPOTTED DAMAGE TO BACKPLANE PINS ON GATE A, COMPARTMENT B1

I had not been doing any debugging or signal tracing in A-B1 yet, so I didn't look to closely at it. However, today the light was just right and made these bent pins very obvious to me. Fortunately none are touching each other and none are snapped off, but there may be failure of traces at those locations which I will eventually come across. 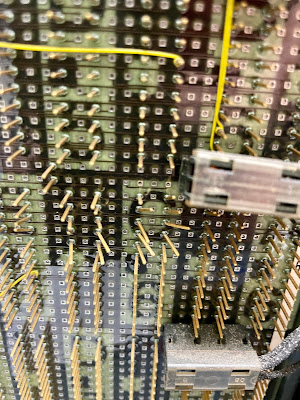 This area is exposed on the rear of the machine and likely was struck by something during transport. I can't imagine any other way this could have occurred. The object was narrow and forced them to the right, some up and some down.

I ran through my test loop and typed every possible shifted character. All produced the proper Hollerith code in bits 0 to 12, representing rows 12, 11, then 0 through 9 of a card, in order from left to right. This proves out the health of the contacts in the keyboard, which is a complicated mix of electrical and mechanical encoding.