SPOTTING +6V ON THE PULLUP RESISTOR CONNECTION TO THE AOI GATE

I probed around the entire circuit that generates the -DC Reset signals for the computer, hoping to spot some dynamic oddity that would hint at where the defect lies. This is implemented across three SLT modules plus a capacitor and resistor. And-Or-Invert module AOI, And Or Extender AOXb and High Performance Driver HPD modules.

At the AOI module, I noticed that the voltage source for the output pullup, which should be +3V, was at +6V. This is the same as the adjacent pin which provides pullup for the diode logic side of the circuit.

The module has +6 connected for the left pullup resistor but should have +3 on pin 7 for the output pullup. I found +6 on this location. I initially suspected some kind of internal failure or short in the SLT module. I decided to replace it.

I had a spare card from old ebay purchases, having a damaged connector but a few AOI modules on the card. I desoldered and removed the module from this donor board and from the 6213, then swapped the good one onto the board and soldered it into place.

The exact same symptoms exist - the oscillation at low levels of -DC Reset when the -Reset key is pressed. The voltage on pin 7 is also +6V. I removed the solder and tested to confirm that the two pads on the card are both connected together.

I ran out of time but will continue to look at this from time to time, hoping to get to the bottom of the problem and repair the card. One test will be to see if these pins are also connected to +3 rail. If so, this is a short of some kind on the PCB of this card. If not, this may be an intentional distortion of the circuit for some engineering reason, thus not the cause of my symptoms.

TESTING WORKING 6213 TO SEE IF THIS IS INTENTIONAL CONNECTION

I pulled the working 6213 card and put the VOM across the two pins. There is no connection like there is on the bad card.

CHECKING CONNECTION BETWEEN +6 AND +3 ON CARD

The other possibility was a short on the PCB somewhere on the card that was connecting +3 and +6 together. That was very unlikely since all the other gates worked fine, but I had to test just for completeness. No issue here. Instead it appears the card was manufactured with this pin tied to +6 instead of the +3 it was designed for.

CUTTING CONNECTION AND ADDING JUMPER TO +3; NO RESOLUTION

I dug out the trace connecting the pin to +6 and instead soldered on a small jumper to a nearby source of +3V. I had hoped that would resolve the issue but when I tested, the oscillation is still there! At this point, all I can think of is a weak transistor probably in the AOXb module. 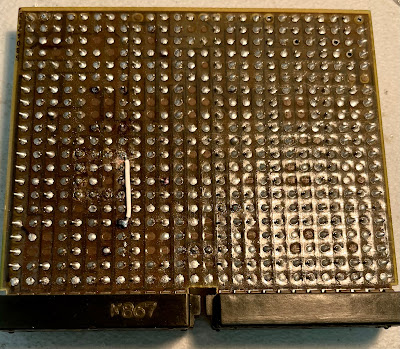 While I have spare AOXb and HPD modules, so that I could continue swapping modules to fix this card, I am not sure it is the best use of my time right now. After all, this is a spare card, not needed because the primary card works fine. I will just add a marking to the card with the fault and save it for now.

The prior restorer had put out the backup 6213 card but also a 6212 card, one that handles some of the buttons, rotary mode signals and CE switches. It sits in gate B, compartment A1, at location B4. I don't see any indication that the original card is not working but decided to test the spare because it was easy to do with the test rig already set up.

All the debouncers worked properly and produced clean output signals. The card also has a number of single shot circuits to produce pulses at important times. I verified that all of these were triggering and giving a clean pulse. That card can go into the spares pile as a good backup.